Home NEWS WATCHES Zenith invites its fans to take part in the “El Pri,mero Lightweight...
Facebook
Twitter
Pinterest
WhatsApp
Linkedin
ReddIt
Email
Print
Tumblr
Telegram
VK
Digg
LINE
Viber
Zenith offers a blend of lightness, daring and innovation through an exclusive version of its El Prmero Striking 10th chronograph characterised by an emphasis on high-tech materials. Issued in a 100-piece limited edition, the El Primero Lightweight model teams a titanium and silicon movement with an ultra-sporty carbon case. In parallel with this launch, the brand with the guiding star is organising a competition exclusively reserved for its Facebook fans who can try their luck and attempt to win an unforgettable Zenith experience linked with the theme of lightness.
To mark the launch of its new model and to reward its constantly growing Facebook community, Zenith is inviting its fans to take part in the “El Primero Lightweight Experience”. Via a dedicated platform featuring an original design inspired by the brand values, internet users will be asked to estimate the weight of this ultra-light model in order to take part in the adventure. The latter will continue with a balloon release from the Manufacture, in the exact same spot where its founder Georges Favre-Jacot built the first workshop. This autumn, the company’s watchmaking artisans will be invited to release balloons attached to printed cards bearing the name of all the adventurers from around the world who have entered the competition.
Six participants will be rewarded and will enjoy a chance to discover the new El Primero Lightweight as well as an unforgettable airborne experience: a free fall, an airship flight or a paragliding jump. The sky is quite literally the limit! This competition will provide a 360° experience involving the brand’s Facebook fans as well as its watchmaking artisans. The lucky individuals who find one of the balloons will also have an opportunity to try their luck by returning the printed card to Zenith.
Founded in Le Locle in 1865 by a visionary watchmaker, Georges Favre-Jacot, the Manufacture Zenith earned swift recognition for the precision of its chronometers with which it has won 2,333 chronometry prizes in a century and a half of existence: an absolute record in terms of pocket watches, onboard timers and wristwatches. Having earned fame thanks to its legendary El Primero calibre – an integrated automatic column-wheel chronograph movement launched in 1969 and endowed with a high frequency of 36,000 vibrations per hour that ensures measurements accurate to the nearest 1/10th of a second – the Manufacture Zenith has since developed over 600 movement variations. All Zenith watches are fitted with an in-house Zenith movement and are developed by the Manufacture in Le Locle. The latter currently stands at the exact spot where its founder built the first company workshop, thus physically embodying a continuity that is a rarity in itself. 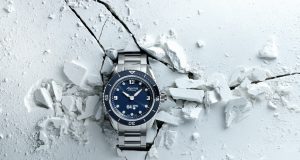