Nelly was introduced to the world of alpine skiing at the age of 3, by her father, a ski instructor. Since her very first races in 2000, her parents have been very supportive throughout her career. She quickly grew a passion for snowboarding and swapped her skis for a snowboard. In research of new sensations, snowboard cross became her official discipline. Nelly practices her sport rigorously within the French National Team, in an atmosphere she calls “funformance”, in her words, a happy medium between fun and performance. It’s not surprising once you get to know her outgoing personality. She is part of today’s top world female elite of snowboard cross.

As an engaged and dedicated personality, Nelly is committed to reach podiums. Her innate physical and tactical qualities quickly propelled her to the top of the rankings. Three times Olympic Games participant in 2010, 2014 and 2018, vice-world Champion in 2011 and 2015, Nelly made a sensational season in 2015 by claiming the famous crystal globe in her discipline. Last 2017-2018 season, Nelly finished #3 in the FIS Worldcup Snowboard cross ranking.

As a passionate and generous personality, and appreciating the hand-made work, when Nelly needs to bring back her Alpina timepieces for a revision, she is not simply passing by and dropping off her watches. No, Nelly arrives quite early in the morning, puts on a watchmaker’s blouse on her back, and seats behind a watchmaker’s table in our T1 atelier for the day! Next to our watchmakers, who are more than happy to have a new colleague for the day, they help and train Nelly for her to revise and regulate herself her timepieces.

With her perseverant and competitive nature, Nelly embodies our brand’s emblematic Alpine spirit. We are very happy to count Nelly as part as of our “Alpinist” family and we wish her all well-deserved success for her next season.

Nelly brings Alpina’s DNA to life and we are very proud to count Nelly as part as our Ambassadors. She embodies the brand’s emblematic Alpine spirit. Nelly Moenne-Loccoz and Alpina are united by their love for Alpine sports and the Alpine universe and identify with the same “Alpinist” values which both believe are the foundations for any sports, professional and personal success. 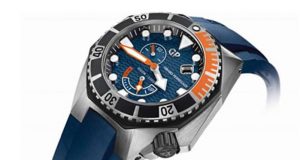 Editor - 23/04/2014 0
The new Sea Hawk takes a bold stance with its vivid hues. Cobalt blue and coral orange are the colors chosen for the dial,...