The writer Frédéric Dard would have been 100 years old in 2021. A limited-edition Swiss Made watch numbered 1921 pieces, is celebrating the memory of the most prolific of all French-speaking authors. Available in three versions.

1921-2021. All over the world, the French-speaking world multiplies tributes.
Frédéric Dard is buried in his village of St-Chef, between Geneva and Lyon. This man who had been flayed by life used to publish his detective stories under the pseudonym of San-Antonio.

“My father wrote novels that used to be sold in railway stations, so I wanted a watch that could be as affordable as his pocketbooks,” explains Joséphine Dard, eager to allow all lovers of her late father Frédéric Dard to acquire this collector’s piece, available in three versions. «In no way, it is a commercial operation” she emphasizes. In fact, the benefits of this exceptional sale will be entirely donated to the Association of the Friends of San-Antonio, which has a loyal following and is showing a unique dynamism Thanks to the code SA1921, a 30% discount on the regular price of this ‘memoriam’ timepiece is offered by the legendary Mathey-Tissot brand.

Frédéric Dard, from the top of his 175 books, had invented his own writing, full of neologisms and humor, of franchouillardises, of gallows-style sauciness, and of dirty tricks sometimes as daring as his excellent spoonerisms. In the middle of his characters gallery full of truculence and Rabelaisian portraits, the Police Inspector named San Antonio was playing a sort of French James Bond.

But more direct and more trash! The phenomenon writer was to the recycling of the words of the French language what the sorting of waste is to ecology. Smart! We re-consume or burn it on the altar of recycling. Even today, we can’t get enough of them. Because when the final word arrives, it is the addiction
that takes over so much its enigmas are tortuous, unpredictable, rupturists, and… terribly humanistic. From the failings of his peers, Frédéric Dard was able to create a series of situations in which the comical mixed with tenderness, where sex rubbed shoulders with real feelings.

Mathey-Tissot: a legend in three versions

While the major French newspapers, festival headlines, and major cultural events are multiplying special editions and retrospectives, the historic watch brand Mathey Tissot, renowned for its Swiss Made affordable to the world’s markets, is reviving its legendary history: Among other prestigious Maisons to whom this legendary manufacturing treasure used to deliver its rather complex calibers from the Ponts-de Martel (Republic and Canton of Neuchâtel in Switzerland), the brand founded by Charles-Félicien & Charles Émile Tissot in 1886, was multiplying the most prominent ambassadorial conquests. Like the King himself, Elvis Presley, who had an eponymous collection.

In 2021, the San Antonio Signature watch by Mathey Tissot is available in blue, with a steel bracelet, a blue nato sport strap, or in blue leather. Manufactured in a limited edition of 1921 pieces, all individually numbered, it has replaced its central second’s hand with a clearer vision of the mythical signature: San Antonio is stamped on the dial’s deep blue. One of the most unavoidable signatures of French literature. Perhaps the most universal too, in any case, the most
original. 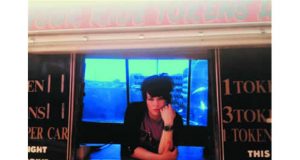 Alex Hepburn showcases “philosophy of life” in her new video