The 9th edition of the auction of unique timepieces sold in aid of research on Duchenne Muscular Dystrophy will take place on Saturday, November 6th,2021. Boosted by touches of iridescent orange, the Ulysse Nardin only watch UFO has everything to raise the bidding of lovers of beautiful objects.

This year, the timepiece auctioned by Ulysse Nardin for Only Watch is not a wristwatch but a wacky high-flying clockmaker’s object, a work of art, a piece of design and architecture, a toy, quite simply: the UFO, a table clock ready to welcome you onboard for a new entertaining odyssey, in a “unique piece” version with an orange hue.

Indeed, the electric orange palette of Only Watch has sprung out in touches on the Ulysse Nardin UFO! The out-of-the-ordinary object, already venerated by traditional clock lovers and acclaimed when it was released in April 2021, is already sold-out in its metallic blue version of which the house produced only 75 pieces. The UFO is making an energetic return to center stage for the auction patronized by H.R.H. Prince Albert II of Monaco, established by the Monegasque Association against Muscular Dystrophy.

The spherical aluminum base of the clock on which the blown glass dome is secured by a bayonet system is made orange by a special anodizing surface treatment. The three connecting cylinders and the three lower ties of the movement have also been colored orange. The power reserve disk, the decorative insert with the Ulysse Nardin emblem – the anchor – also colored orange. The three dials also painted, but with a mat appearance unlike the other
metallic orange elements.

A unique piece, exclusively produced for the occasion, it will be auctioned in November 2021. Its pop details remind us that the orange color is stimulating and full of joy. A call to the nonchalance of sunny days. As if illuminated, energized and sunlit, the UFO sways in the most refined way. So, with this orange version, this is a golden opportunity to acquire a unique origin of this art object

Under the patronage of H.R.H. Prince Albert II of Monaco, the Only Watch auction was established by the Monegasque Association against Muscular Dystrophy (AMM). This eagerly awaited biennial event will premiere in Monaco as part of the Yacht Show (September 22nd -25th 2021) which has been sponsored by the brand for over a decade.

This promotional tour, which will end in Geneva (November 6th) will allow many collectors, fans, aficionados, and media representatives to discover the creations. Europe, Asia, the Middle East, and the American continent will host stages
of it.

The event aims to raise money for research into muscular dystrophy, including Duchenne. Duchenne muscular dystrophy affects around one in 3,000 boys at birth and causes progressive degeneration of all the muscles in the body.

Only Watch brings together unique timepieces by luxury watch brands. Since 2005, some 40 million Swiss francs have been raised for this cause thanks to the watches donated by around fifty participating brands.

Luc Pettavino, President of the Monegasque Association against Muscular Dystrophy explains that “this initiative demonstrates, edition after edition, that empathy, altruism, and mutual respect expressed within a collective movement
have extraordinary strength and are a form of hope in a world undergoing great change”.

THE ORIGIN OF THE OBJECT

Swinging, the design object has just what it takes to revive all your childhood dreams. It is a sphere, a globe. From the marine chronometers of the 19th and 20th centuries to the Freak in 2001, and then the Blast in 2020, the Manufacture has constantly designed technical and cutting-edge watchmaking objects.

THE MARINE CHRONOMETER OF THE FUTURE

175 years ago, Ulysse Nardin was renowned for its incredibly accurate and extremely reliable ships’ watches and marine
chronometers. These were prize-winning machines, scooping up the first prizes in the chronometry competitions of both Geneva’s and Neuchâtel’s observatories. Forty-five admiralties were kept on course, navigating the high seas thanks to Ulysse Nardin’s superlative craftsmanship.

So how to celebrate the future of the brand, while staying true to the desire to make the best time-measuring tools,
which was the challenge Ulysse Nardin set himself in 1846?

“Reissuing a watch from the past by reusing vintage codes was not part of our creative intentions for this anniversary
object. On the contrary, we wanted to reverse the trend and make a leap forward of 175 years, rather than a leap
backward. We always look ahead. We wondered what a marine chronometer designed in 2196 would be like,”
explains Patrick Pruniaux, CEO of Ulysse Nardin.

With its 675 components and triple-dialed time zones, the UFO is the futuristic interpretation of what Ulysse Nardin’s
designers, engineers, and watchmakers think a marine chronometer should look like in 175 years’ time. This UFO
has been designed to guide the explorers of the future, whichever seas they may sail.

Taking the ocean as the ultimate inspiration, the movement of the UFO is that of the waves made mechanical. The entire structure of the clock is built on an imbalance, on a gentle swing that recalls the ebb and flow of the tides, the perpetual movement of the ocean. The secret of the balance is its orange half-spherical aluminum base, which contains a tungsten mass. The base and glass bell is joined by a bayonet mounting the system, which looks similar to the old systems of marine chronometers from which the glass could be unscrewed.

Whereas marine chronometers were housed in wooden boxes and set on gimbals to counteract the effect of the ship’s constant sway, Ulysse Nardin reverses this. Here it is the object itself that makes waves when it is nudged gently. Weighing 7.2kg, the UFO swings up to 60° from its axis – an amplitude of 120 degrees – and the engineers have accurately calculated the center of the gravity/mass/inertia ratio, which allows UFO to swing neither too fast nor too slowly and without significantly affecting the operation of the balance.

It isn’t just the UFO’s movement that is inspired by the ocean, the architecture is too. The bell under which this incredible creation is housed suggests floating black and yellow cardinal buoys – objects that also provide inspiration for the X sitting in the spine of the table clock. From above, the construction of the UFO seems almost kaleidoscopic, with its
emblem, the marine anchor, dominating the heart of the rosette.

The UFO is mesmeric enough, but attention should also be paid to the ovoid glass bell under which it sways. It has been created by Romain Montero, a 26-year-old artisan glassblower who works for Verre et Quartz, a technical glass-blowing workshop located on the shores of Switzerland’s Lake Neuchâtel. He had the responsibility for handcrafting for every one of the 75 numbered limited-edition UFO glass covers.

“The biggest challenge was the overall aesthetics of the glass tube. To get 50 spotless glass bells, I had to blow out three times the number, 150 bells. You need to blow gently as if you want to make a soap bubble. Even so, the glass is imperfect at the base and is sensitive to micro-vibrations during blowing, but there is beauty in those imperfections and small flaws,” explains Montero.

To manufacture each 3mm-thick tube, it was necessary to stretch the glass when it was still hot, for more than 45 minutes, using only the naked eye, on a traditional glass-maker’s lathe at temperatures of up to 1,500 degrees. As it is heated the glass is transformed, becomes orange, red, white, and morphs through all the hues of pink. The total process takes almost half a day of work: cutting of the glass, blowing, checking the blowing and the measurements,
furnace annealing, cutting again, lamination, final and visual inspection, and then cleaning.

Like all the most successful voyages, it takes an experienced crew. For this particular journey, Ulysse Nardin decided to collaborate with the celebrated clockmaker Maison L’Epée, who has been manufacturing traditional clocks since 1839 and is now famed for bringing the fantastical imaginings of MB&F’s CEO Max Busser to life.

Comprising 675 components, and with one year of power reserve supplied by its six extra-large barrels, and a balance wheel rim that reaches the spectacular diameter of 49 mm, UFO displays the time on three trapezoidal dials, which are so complex it takes 28 hours to manufacture just eight of them. Having three dials allows the owner to display three different time zones at once, seen from three different angles.

The XXL brass balance wheel beats at 0.5 Hz and the objective is twofold: to maintain a power reserve never before offered – one year – and to make the movement of the object like a meditation; gentle and soothing with ample time to admire one alternation (half oscillation) per second. The addition of a dead-beat second adds to that sense of this
table clock is a meditation on time, with the passing of each second uniformly marked.

UFO comes in a wood treasure chest aged as if it been discovered washed up on a beach; something that appears to come from the past but with a message from the future contained within. Inside, you will find UFO, but also its operating instructions, its warranty card, and a special place for its winding key. It takes 40 wind-up turns with a square-end stainless steel key to wind up the mechanism for one year. Each dial has its wind-up notch, which is also used to set the time (four notches in total, one for winding up and one for each time zone wound up using a single key).

About Ulysse Nardin – Manufacture of Freedom

Ulysse Nardin is the Pioneering Manufacture inspired by the sea and delivering innovative timepieces to free spirits.

Founded by Mr. Ulysse Nardin in 1846 and a House of the international luxury group Kering since November 2014, Ulysse Nardin has written some of the most beautiful chapters in the history of Fine Watchmaking.

The brand owes its reputation to its ties with the nautical world: its onboard marine chronometers are among the most reliable ever designed and remain very popular with collectors all over the world. A pioneer in cutting-edge technologies and the use of innovative materials such as silicon, Ulysse Nardin is one of the few manufactures with the in-house expertise necessary to produce its own high-precision components and movements.

An exceptional level of horological excellence has earned it a spot in the exclusive circle of Swiss watchmaking: the Fondation de la Haute Horlogerie. Ulysse Nardin is taking action in two main ways to help conserve the oceans: reducing marine plastic pollution and developing scientific knowledge in shark conservation, animals which are its emblem. Today, from Le Locle and La Chaux-de-Fonds in Switzerland, Ulysse Nardin continues its quest for watchmaking perfection around four pillars: Marine, Diver, Blast, and Freak. In 2021, Ulysse Nardin is celebrating its 175th anniversary and is offering fans of exploration a vertical odyssey, from the ocean depths to the upper atmosphere.

The international show for jewellery machinery and manufacturing will be back. 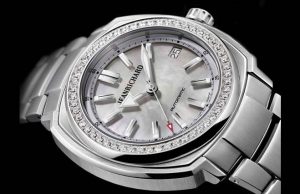 Editor - 16/12/2014 0
JEANRICHARD has developed its Terrascope in a second 39 mm diameter ideally suited for any wrist. This new face for the brand's iconic model...

Zenith invites its fans to take part in the “El Pri,mero...